The Barony of Axemoor is a local group inside the Society for Creative Anachronism (SCA). We are a medieval recreation, non-profit organization. The goals are to learn about and recreate day to day life in the middles ages, with an emphasis on pre-17th century medieval culture and education. Our group, The Barony of Axemoor, covers the Greater New Orleans area in Louisiana. We reside in the Kingdom of Gleann Abhann. 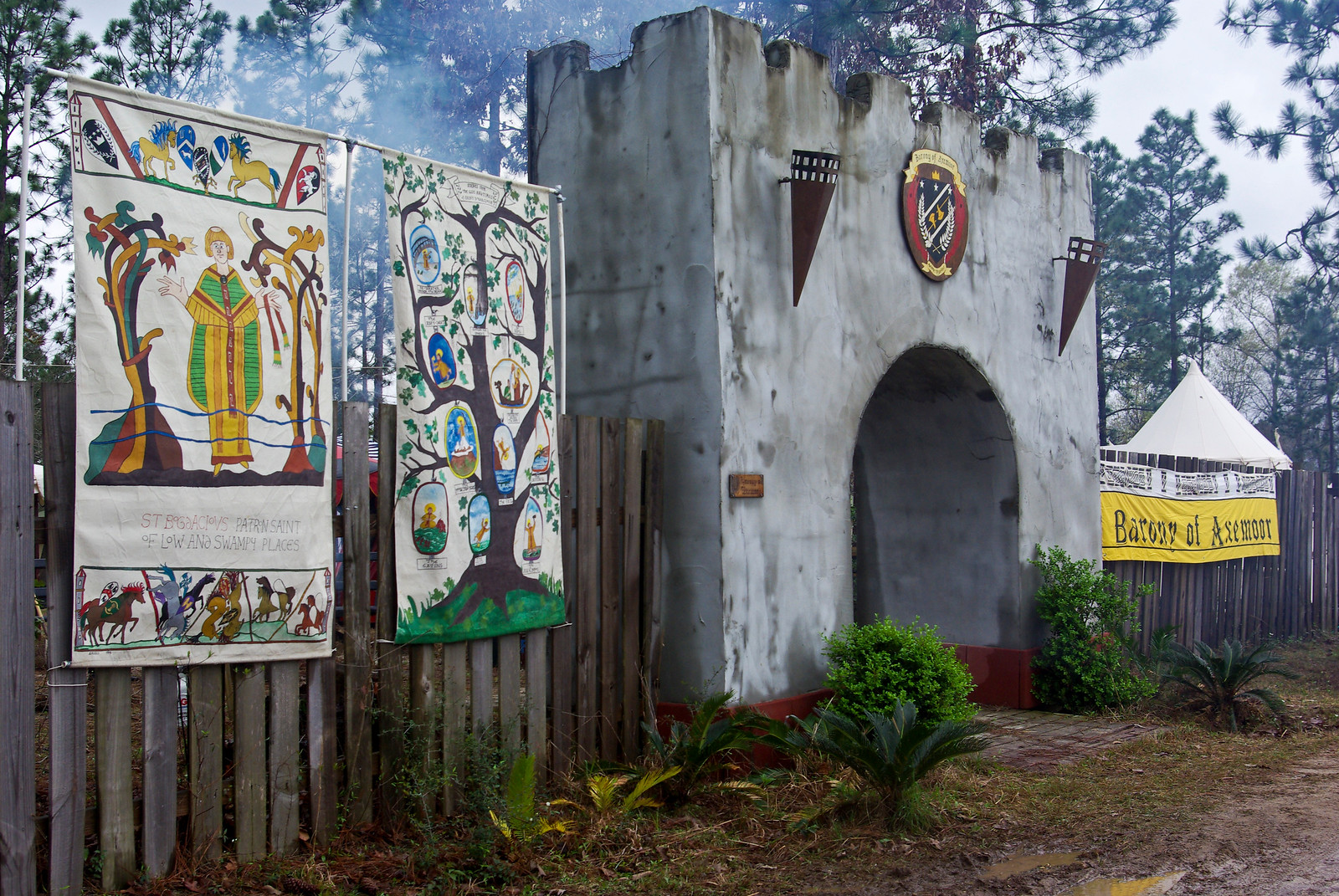 Our current Baron and Baroness are Baron Floki Refksegg and Baroness Baroness Kitta Fuxdottir. We held our investiture at Gulf Wars 30, in March 2022. Please see our officers page for a full list of Baronial positions held. 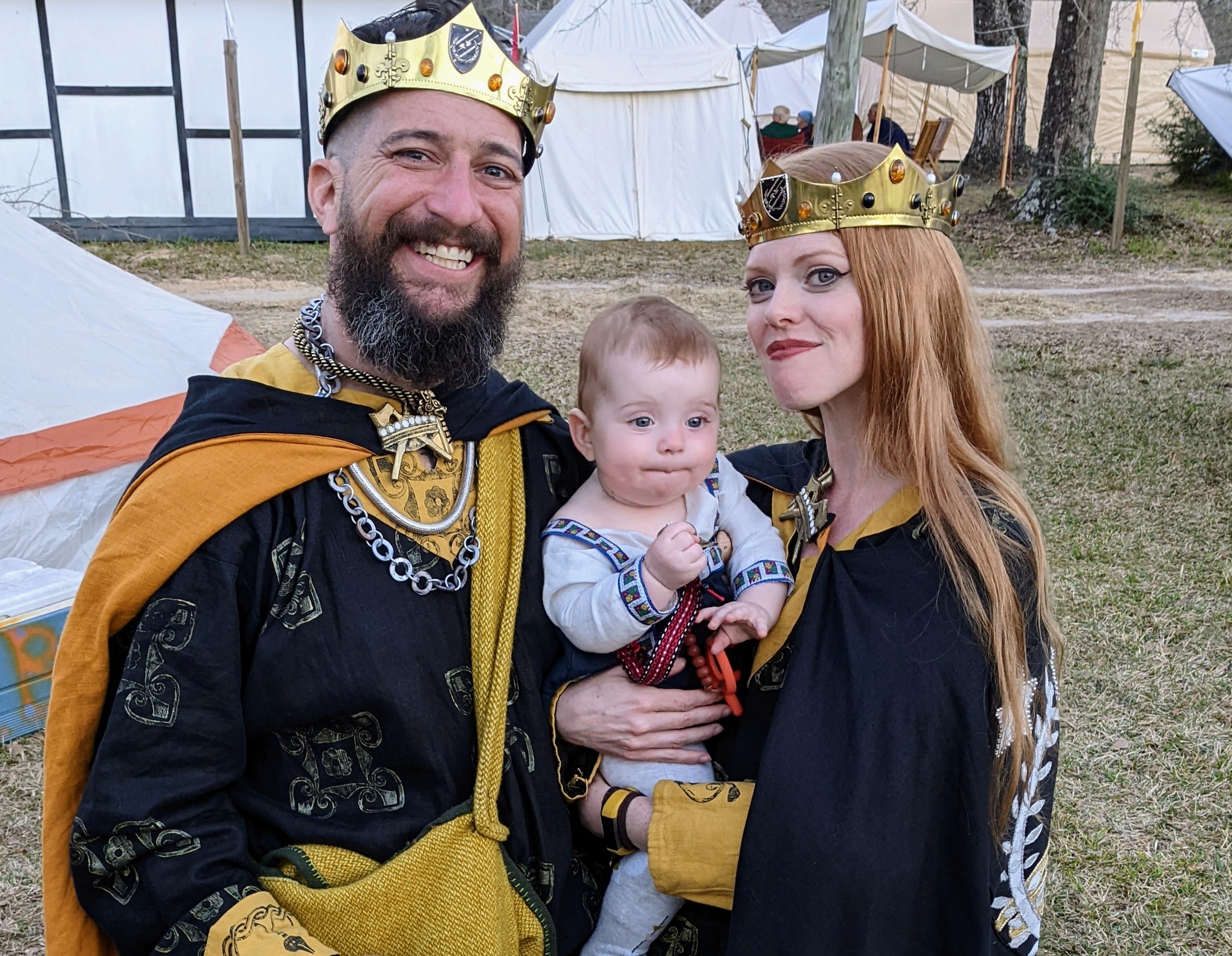 The Beginnings, From A History of the Barony of Axemoor

Axemoor was founded in 1976 Gregorian, or AS X, when there was as yet no Kingdom of Meridies. The previous group formed in this area, which was called The Fens, had long since vanished. Back then, the Kingdom of Atenveldt stretched from far into the Northwestern US through the Rockies, far to the west of Axemoor, and down to these southern lands along the Gulf Coast and on towards the Atkntic Ocean.

The southern and eastern lands were known as the South Marshes. The great Barony of Draconia, mundanely known as Baton Rouge, was not only the first barony in all the South Marshes, but also the first major group active in the State of Louisiana. According to the second edition of The History of Meridies, which was published in AS XXIX (1995), Draconia was founded in AS III.

It was in Draconia, in AS VII, that the first meeting between the officers of this far flung Kingdom came from the western end of Atenveldt to meet face to face with their southern and eastern subjects. Until then the people of the South Marches had not really been exposed to what was considered proper garb or armor, not were they aware what was accepted in Atenveldt as proper decorum. It was also the beginning of South Marshes’ transition to becoming the Kingdom of Meridies in AS XII.

Geographically, Axemoor’s territory covers, in Mundania, several of Louisiana’s parishes (what are known elsewhere as counties): St. Bernard, Plaquemines, Orleans, Jefferson, Tangipahoa, St. Tammany and Lafourch. Back in AS X, Axemoor started in Orleans Parish, also known as New Orleans, but today we are more widely spread out and claim all of the above areas. We have also been sponsor to the incipient shire of Vogelburg in Alexandria, LA in the parish of Natchitoches for several of their events.

As I mentioned before, Axemoor was founded as a shire in AS X, 1976 Gregorian, by a very determined man known as James Stephen Wolfs Law, also called Worry, mka James Myers. A letter was found in the seneschal’s records dated October 13, 1975 which was a response to an earlier letter requesting information on how to establish an SCA group in New Orleans. The earlier letter to which this was a reply is missing from our records. The letter we do have is from Tagon the Talesmith, mka David Moore, to James Myers. By January of 1976, we were organized as a shire with James Stephen Wolf s Law as our first seneschal.

He later moved to West Palm Springs, Florida where he helped in the formation of the Shire of Seamarch, as well as helping in the creation of the Kingdom of Trimaris. During his time in office, he had the group vote on a name. There was a tie between the names Axemoor and Wolfy’s Bane and the seneschal had the deciding vote. Other contending titles were: Quaking Bogs, Afar, Lowdown and Wirklichen, which means “really” in German. I, for one, really give thanks to his wise choice of voting for the name Axemoor.

The origin of the name Axemoor came in part from the original group, The Fens, since moor is another word for fen. Our early fighters all favored the use of axes, so we became Axemoor. We first met as a khanate, but quickly turned Roman in flavor in those early years. Over the years Axemoorians have had a variety of personnae and special interests. Currently there is a mixture of both western and eastern personnae from Celtic to Mongol, along with a sprinkling of Byzantine, Polish, Italian, German and Norse. Axemoor was never a canton, but started as a shire in January of AS X and was elevated to a Barony in December AS XII.